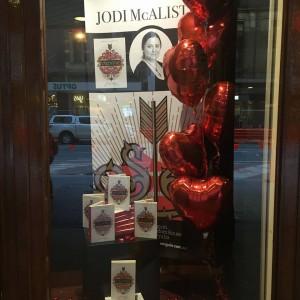 In the history of perfect launch dates, you can’t get much better. Jodi McAlister’s blockbuster YA debut Valentine launched on Valentine’s Day this year as part of the Penguin YA Showcase in both Melbourne and Sydney. As part of the celebration, Penguin provided TWO huge cakes decorated with the gorgeous Valentine cover. And not a fairy around to spoil it (that we saw…)

Valentine is an Australian YA fantasy-romance, and Jodi’s first novel in a prospective four-book series. AAPS signed Jodi in 2015 and we’ve been eager to share the book with the world since. Penguin has done an amazing job with it (seriously, look at that cover!) and the launch was a massive success.

Strange and terrible things begin to happen to four teenagers – all born on the same Valentine’s Day. One of these teenagers is the Valentine: a Seelie fairy changeling swapped for a human child at its birth. The Unseelie have come to kill the Valentine – except they don’t know who it is.

Pearl shares a birthday with Finn Blacklin. She’s known him all her life and disliked every second of it. Now Pearl and Finn must work together to protect themselves from the sinister forces that are seeking them out.

But there’s one more problem: the explosive chemistry between them . . .

In addition to the awesome launch party, Jodi and Valentine have already been scoring some incredible reviews: 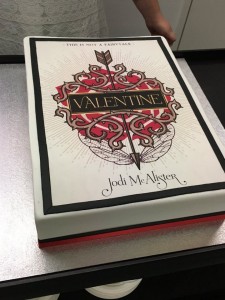 “When so much urban fantasy comes to us from overseas, it’s refreshing to read a story containing so much that is recognisably Australian. ” — Readings

“Oh, how I love this book. I loved Pearl’s voice from the very beginning. She is witty and smart and full of asides, which I love … I read this in two days, forgoing sleep to get through it, because I just had to know how things would play out.” — Reading Lark

“Valentine is fast paced and witty, at times confronting and sad, sprinkled with suspense and a touch of gory, and endearing characters.” — Kids’ Book Review