Apart from being a spectacularly fabulous place to live, Brisbane city is home to some amazingly talented creators. So, when Brisbane’s AWARD WINNING AUTHOR ANGELA SLATTER *AND* AWARD WINNING ILLUSTRATOR KATHLEEN JENNINGS teamed up to create beautiful illustrated editions of Angela’s short stories, I could not have been prouder to be asked to work with them on finding a publisher for their illustrated works.  The buzz has already started, and so I’m happy to announce officially that this creative duo have signed with Alex Adsett Publishing Services.

Brisbane-based writer Angela Slatter has won five Aurealis Awards and one British Fantasy Award, been a finalist for the Norma K. Hemming Award once and the World Fantasy Award twice. She’s published six story collections (including Sourdough and Other Stories and The Bitterwood Bible and Other Recountings), has a PhD, was an inaugural Queensland Writers Fellow, is a freelance editor, and occasionally teaches creative writing. Her novellas, Of Sorrow and Such (Tor.com) and Ripper (in Horrorology, Jo Fletcher Books), will be out in October 2015, and Jo Fletcher Books will publish her debut novel, Vigil, in 2016, with its sequel, Corpselight, coming in 2017. Her website is located at www.angelaslatter.com and she can be found on Twitter @AngelaSlatter. 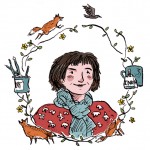 Kathleen Jennings is an illustrator in Brisbane, Australia. Her first cover illustration was for Greer Gilman’s Tiptree Award-winning novel Cloud and Ashes: Three Winter’s Tales (from Small Beer Press). She has created illustrations and cover art for many authors, including Kelly Link, Catherynne M. Valente, Karen Joy Fowler, Angela Slatter and Lisa Hannet, and for publishers such as Tor.com, Small Beer Press, Subterranean Press, Candlewick Press, FableCroft Press and Ticonderoga Publications. She has earned an international reputation as an illustrator, with two nominations for the World Fantasy Award, and several Ditmar Awards to her name. Many of her illustrations and incidental drawings appear on her blog tanaudel.wordpress.com, her portfolio can be found http://illustration.kathleenjennings.com/ and she tweets @tanaudel