The Subjugate optioned by Aquarius Pictures 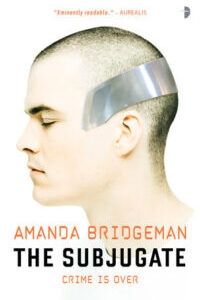 Leading independent production companies Aquarius Films and Anonymous Content have joined forces to produce the sci-fi crime thriller series The Subjugate based on the acclaimed novel of the same title written by Tin Duck Award-winner, Amanda Bridgeman, and published by Angry Robot Books.

Aquarius Films acquired the development and production rights to The Subjugate novel which received great reviews from critics and was described by Nathan M Farrugia (USA Today bestseller) as “The Wire meets Blade Runner in an enthralling near-future crime thriller.”  The Guardian said it was “a compelling seat-of-the-pants murder mystery and a fascinating inquiry into good and evil and the possibility of redemption”.

The long format series will be produced by Angie Fielder and Polly Staniford for Aquarius Films and Luke Rivett and Ryan Cunningham for Anonymous Content.

“The Subjugate explores topical themes of rehabilitation, recidivism and advancing technology in a captivating near-future science fiction thriller and is perfect raw material for a compelling TV series. We’ve always been huge fans of the work that Anonymous Content produce and are thrilled to be partnering with Luke and Ryan to bring to life the rich and complex world that Amanda Bridgeman has created in her novels” producers Angie Fielder and Polly Staniford stated.

“Amanda has created an incredibly complex world that examines the bonds between good and evil and what happens when the lines between the two are blurred. We are thrilled to collaborate with Angie, Polly, and the Aquarius team to bring Amanda’s novel to life on screen,” said producers Luke Rivett and Ryan Cunningham.

In 2040, a series of murders sends shockwaves through the religious community of Bountiful, that has turned its back on technology and the modern world. The obvious suspects are The Subjugates, violent offenders who are transformed into town servants, known as Serenes at the Solme Complex. Sent from the city to investigate the crimes, two homicide detectives are met with open hostility. In a town where purity and sin, temptation and repression live side by side, everyone has a motive. But as the bodies mount up, the frustrated detectives begin to crack under the pressure. As their mutual mistrust builds, they set out on parallel investigations, which finally collide at the Complex – where they discover the distressing truth about the treatments taking place there.

Amanda Bridgeman is a Tin Duck Award winner, an Aurealis and Ditmar Awards finalist, and the author of several science fiction novels, including the bestselling space opera/military SF Aurora series and alien contact drama The Time of the Stripes. She was a finalist in the Universal AU/Screenwest Pitch competition and a finalist in the AACTA Regional Landscapes Pitch in partnership with Screenworks Pitch. Her upcoming novel Pandemic: Patient Zero will be the first novel set in the award-winning Pandemic tabletop board game universe. Planned as a trilogy, The Subjugate is the first in the series featuring Salvi Brent. The acclaimed second book, The Sensation, was released worldwide in October 2020 through Angry Robot Books (UK). Bridgeman is currently working on the third and final novel in The Subjugate and The Sensation series.