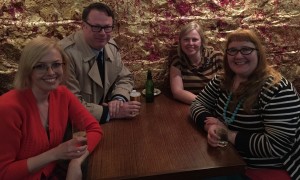 This is a big week at AAPS, and we’re thrilled to also be able to announce that The Hot Guy has been acquired by Echo Publishing. The Hot Guy is a fun romantic comedy co-written by popular journalist, author and cultural critic Mel Campbell and Junkee journalist Anthony Morris. Echo Publishing will publish in June 2017.

Mel and Anthony have had a whirlwind romance with AAPS, so we’re not only announcing their debut novel as a co-writing team, but welcoming them to the agency!

The Hot Guy is about recently dumped publicist Clare, who is encouraged by her friends into a one night stand with “hot guy” Adam to boost her self-esteem. Problem is, budding film director Adam is a genuinely lovely guy and sparks fly. As their relationship takes off, their friends and rivals try to break them apart, because surely no real relationship can exist with a guy as hot as Adam.