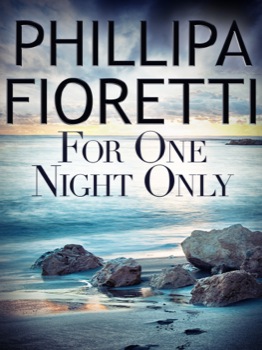 Philippa Fioretti’s fabulous new romantic suspense For One Night Only has been released in ebook by Momentum Publishers.

In Italy, passion and danger share the same bed.

When Ornella vacations in Sicily, she meets Hugh, an archaeologist working on a dig in the beautiful town of Taormina. Hugh convinces Ornella to join him on a trip to the island of Stromboli, where they hike up a live volcano at dusk.

After a passionate night together Ornella, an actress usually focused on her career, suspects she’s in love. But after breakfast the next morning, Hugh vanishes.

Ornella is left with Hugh’s phone, sunglasses and a sudden end to the love affair she thought she didn’t want. Desperate to know if Hugh ran out on her or if he’s met with disaster, she wants to search for him. But with an important screen test in Rome and her agent impatiently waiting for her, Ornella faces a dilemma.

Little does she know the danger Hugh is in and that she is the key to his survival.

Available from all good ebook retailers, including direct from the Momentum here.