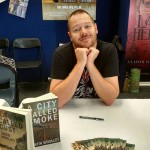 In news that will surprise no one, we are very proud to welcome author Justin Woolley to Alex Adsett Publishing Services. Justin is the author of the YA apocalyptic Territory series, A Town Called Dust, A City Called Smoke, and A World of Ash, published by Momentum. AAPS has been working closely with Justin since we partnered with the Bookharvest Literary Agency in 2014, and with the completion of the Territory series, and Justin’s thrilling new SF work, it was time to make it official. We’re pretty darn excited!