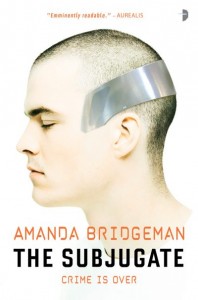 We are delighted to announce Amanda Bridgeman’s incredible science fiction crime thriller The Subjugate has been acquired by UK publisher Angry Robot. Angry Robot will be publishing simultaneously in UK, USA and Australia on 1 November 2018.

Amanda is already established in science fiction circles with her epic space opera Aurora series, and with The Subjugate, a standalone near-future SF thriller, she ratchets up the tension with a string of murders, a religious cult, and cutting edge tech.

In a small religious community rocked by a spree of shocking murders, Detectives Salvi Brentt and Mitch Grenville find themselves surrounded by suspects. The Children of Christ have a tight grip on their people, and the Solme Complex neurally edit violent criminals – Subjugates – into placid servants called Serenes. In a town where purity and sin, temptation and repression live side by side, everyone has a motive. But as the bodies mount up, the frustrated detectives begin to crack under the pressure: their demons are coming to light, and who knows where that blurred line between man and monster truly lies.

The Subjugate will be available for pre-order soon, and watch for it in your bookstore from November!