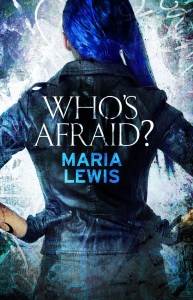 In exciting news for lovers of Maria Lewis’ supernatural novel Who’s Afraid? Alex Adsett Publishing Services is over the (full) moon to announce that it has been optioned for television.

The news was announced on Sunday, April 23 during a panel at Supanova Pop Culture Expo on the Gold Coast which Lewis’ was appearing at.

Hoodlum are one of Australia’s leading production companies, responsible for the award-winning TV series Secrets & Lies which was made for Australian television in 2014, with a US remake starring Juliette Lewis and Ryan Phillippe following shortly thereafter.

They also recently announced a partnership with ABC Studios International, which is owned by Disney, for the development of crime drama Harrow.

Who’s Afraid? was published worldwide in 2016 and follows the adventures of werewolf Tommi Grayson, with the sequel Who’s Afraid Too? published in January, 2017.

Lewis – who is best know for her work on SBS Viceland’s nightly news program The Feed – said she was “thrilled” to be working Hoodlum on the project.

“They’re Emmy and BAFTA award winners for a reason and I’m really excited about the prospect of a Who’s Afraid? series being driven by the Hoodlum team.

“The support they and Screen Queensland have shown for the story I’ve been trying to tell has been phenomenal and made me think that – above all other interested companies – Hoodlum was the right home for Tommi.”

The Chief Executive of Screen Queensland, Tracey Vieira said, “To have the unbelievably talented force of nature that is Maria Lewis join forces with Emmy International Award winning producers at Hoodlum can only result in a creative collaboration that will play well on an international stage.”

The deal was negotiated by Alex Adsett Publishing Services, who also negotiated the publishing deal for the book series with Little Brown and Piatkus Books back in 2014. The Who’s Afraid? series is published in Australia and New Zealand by Hachette.